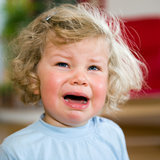 Perhaps the simplest answer to that question is that I spanked because my parents spanked. I figured that it worked for them, it should work for me.

My parents aren’t violent people. They just wholeheartedly believed in the saying, “spare the rod and spoil the child,” as do I.

A swat – not a thug-like whack – on the diapered behind of a toddler often gets their attention like nothing else can. It’s swift.

And that is the point: swift. It doesn’t last long. Note, I wrote the diapered behind of a toddler and not the jean-clad butt of an elementary school-aged student.

Spanking, in my humble opinion, is a tool available to parents for quick and necessary corrective action when a child is younger and unable to reason.

For example, young children often innocently put themselves or others in harm’s way.

In these events, there isn’t time to “talk” about it. Immediate action is required.

Some POPSUGAR Moms readers echo the sentiment that spanking’s immediacy makes it a very effective discipline tool in certain situations. “I personally do not like to spank but I have to agree sometimes it may be necessary when other forms of discipline are not working and the behavior of the child poses a danger to himself or others around him/her,” said Khadijah L. And Cathy S. says that when a child is putting themselves in danger, “it’s the quickest way to get attention and intervene.”

Properly used, spanking isn’t a beating nor should it ever develop into that. It shouldn’t be repetitive. It needs to be a brief, attention-getting signal rather than a permanent mark.

This brings me to the psychological aspect that the existence of the aforementioned rod is supposed to represent.

The exact quotation of “spare the rod and spoil the child” is often mistakenly attributed to the Bible. It was actually contained in the poem Hudibras by Samuel Butler published in 1664. While the Bible mentions discipline many times, the most common reference used to defend spanking is Proverbs 13:34 which is similar. According to the Bible Gateway website, in the New King James Version, it reads, “He who spares his rod hates his son, But he who loves him disciplines him promptly.”

The Biblical “rod” was a tool used by shepherds – not to beat the daylights out of the sheep in their care – but rather to provide firm direction as to which way they should go.

“The rod was used when corralling the sheep to insure they went in the direction they were supposed to go. It wasn’t used to prod or poke, but to direct along the length of the shaft,” explains Drs. David and Donna Lane, members of the American Association of Christian Counselors, on the Home Church Network Association website.

One doesn’t need to be religious to get this concept. For me, it’s a bit easier having grown up on a farm, around animals. My hands have gripped many tools for the purpose of directing livestock. Animals need herding. So do our kids. They need our guidance. They need us to take parenting seriously and do the job. It’s unfortunate that we as fallible humans see that rod and figure we can smack kids into correct behavior. That application of spanking is wrong.

Any discipline tool a parent uses should have this as its goal: directing a change in behavior that matures the child.

So, yes, I spanked, and I hope only when it was the best option. In all honesty, I cannot say I never misused this tool. All parents make mistakes and with full Dutch blood running through my veins, I do at times have a temper. I do know that I walked a safe distance away from my misbehaving child on more than one occasion.

Does that mean this is the only method of correction I used? Well, duh, no. Time-outs were popular when my now 13-year-old was young. I think my ears are still ringing from his protests. (This method doesn’t work anymore, by the way; he just goes to his room and cranks his tunes.)

The forms of discipline we as parents use must adjust as our children age. What worked at age three isn’t going to work at 13. Lightly-applied spanking works in the younger years. But only then. And only if it isn’t beating.

The bottom line is that any form of discipline must be administered with the goal of teaching and forming character. That’s where spanking gets tricky for parents. It’s all too easy to allow our own frustration – rather than the goal of correcting – determine the severity of the spanking.

Parenting isn’t an easy gig. Neither is determining if spanking works as part of your discipline routine. This is a hot button subject and I know I just struck the match against the side of the box. But perhaps we can all gather around the bonfire and chat about this topic without anyone getting burned.

For another perspective, see Why Spanking is Wrong.